On November 17, 2022, CISA and FBI released a joint advisory on Hive ransomware [1]. Hive ransomware group follows the Ransomware-as-a-Service model (RaaS) and targets a wide range of businesses and critical infrastructure sectors such as telecommunications, manufacturing, IT, and the healthcare sector.

According to the FBI, as of November 2022, Hive ransomware has victimized more than 1300 companies, resulting in a loss of $100 million US dollars as a ransom payment. Hive ransomware follows the Ransomware-as-a-Service model (RaaS), enabling its affiliates to utilize the ransomware as they wish. Developers of the Hive ransomware continuously create, maintain and update their malware and add new defense evasion functionalities, such as evading anti-malware protections.

The victim statistics show that threat actors leveraging the Hive ransomware target a wide range of businesses and critical infrastructure sectors such as telecommunications, manufacturing, information technology, and healthcare.

The way Hive actors get their initial foothold on their target's system differs depending on the threat actors using the RaaS. For instance, in some scenarios, threat actors leveraged external-facing remote services such as Remote Desktop Connection (RDP), Virtual Private Networks (VPNs), and other remote network connection protocols (ATT&CK T1133). In other cases, they bypassed the Multi-Factor Authentication (MFA) and gained access to FortiOS servers by exploiting an improper authentication vulnerability (CVE-2020-12812) in SSL VPN in FortiOS, enabling threat actors to log in without providing a second authentication factor, FortiToken.

Figure 1:  Deploying a webshell on the compromised Windows Exchange Server [1]

Windows released patches for these three vulnerabilities in April and May 2021 as part of their "Patch Tuesday" releases.

In addition, Hive actors download and execute an additional obfuscated PowerShell script, which was later analyzed as a part of the Cobalt Strike framework. VirusTotal shows that the malicious file gets flagged by 41 out of 69 detections.

Next, Hive actors use Mimikatz's sekurlsa::logonpasswords module to dump NTLM hashes (ATT&CK T1003) of all the accounts currently logged into the system and use the Administrator's NTLM hash to perform a Pass-the-Hash (PtH) attack.

Using the stolen user credentials, adversaries leverage the "mstsc.exe /v:target_computer_name" command to send RDP requests (ATT&CK T1021.001) to many devices within the same network with the attackers to make sure that attackers have access to the critical databases to deploy ransomware, and therefore to gain higher impact.

Hive actors list all the domain joint assets into a file called domains.txt using the  SoftPerfect tool. Then, they execute a batch script called p.bat to test if the discovered assets are alive.

Example 2: Command in the p.bat script

Hive ransomware group distributes a file with a benign-looking name, "windows.exe" to compromised hosts in their victim's network. In reality, this file is the ransomware payload written in the Go language. "windows.exe" payload uses several defense evasion techniques.

Prior to the encryption process, the Hive ransomware group exfiltrates sensitive data from the victim host by leveraging a combination of rclone and the cloud storage service Mega.nz (ATT&CK T1537).

Upon executing the commands above, the encryption process starts. During the encryption, ransomware drops a key file (*.key) required for decryption on the root directory of the target system [2]. Then the ransom note file is created, HOW_TO_DECRYPT.txt, stating that the key file is required for decryption and any attempt to modify, rename or delete this key file will turn the recovery phase into a dead-end (ATT&CK T1486). 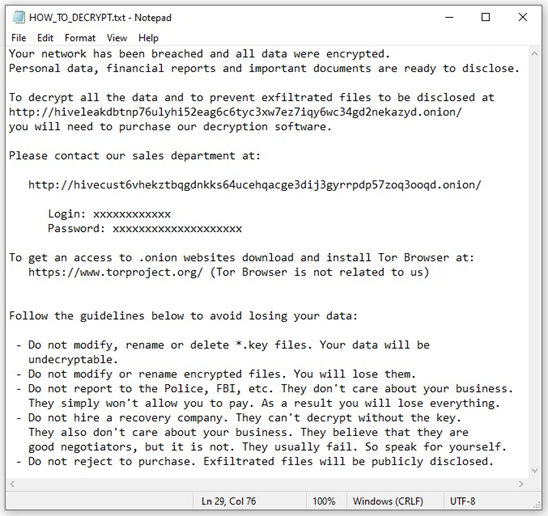 Like other ransomware groups that use the double-extortion model, Hive ransomware leaks sensitive information on their website called "HiveLeaks" if their victims do not pay the ransom.