Welcome to the Picus 10 Critical MITRE ATT&CK Techniques report that is based on the in-depth research from Picus Labs, the research arm of Picus Security.

As a result of the comprehensive analysis of tens of thousands of real-world threat samples collected from numerous sources, Picus Labs unrevealed the most prevalent ATT&CK techniques and tactics to help you focus on what significantly improves your security.

The MITRE ATT&CK Windows Matrix for Enterprise[6] consists of 12 tactics: Initial Access, Execution, Persistence, Privilege Escalation, Defense Evasion, Credential Access, Discovery, Lateral Movement, Collection, Command and Control, Exfiltration and Impact. There may be many techniques to achieve a tactic, so there are multiple techniques in each tactic category. Similarly, a technique may be categorized into multiple tactics. For example, the Process Injection technique is used by attackers for Defense Evasion and also Privilege Escalation. Currently, the ATT&CK Windows Matrix includes 222 unique techniques.

Picus simulates adversarial TTPs in networks and endpoints by mimicking actions of threat actors and their malware without adversely affecting any network or systems. To build adversarial attack scenarios, Picus Labs analyze hundreds of malicious files with the help of internal tools, and open source and commercial sandboxes. Sources of these files include but are not limited to commercial and open-source threat intelligence services, blogs and white papers of security vendors and researchers, social media, malware sandboxes, and forums.

In 2019, Picus Labs analyzed 56149 unique files. 48813 of them (87%) are categorized as ‘malicious’. 445018 actions are extracted from these files, which means an average of 9.12 actions per malware on average. Since multiple actions may be relevant to the same technique, they are mapped to an average of 7.43 MITRE ATT&CK techniques per malware. Therefore, a dataset of 362637 MITRE ATT&CK techniques is used for this report. 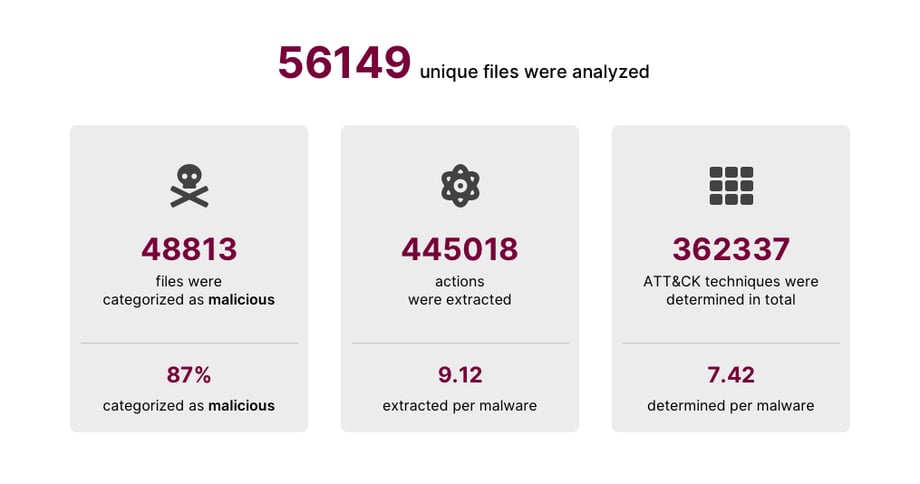 Simulate the Top 10 Techniques in minutes and See your Readiness for Top Attack Techniques NOW!

Apart from our report, there are valuable studies on top ATT&CK techniques. The following table presents the top 10 lists prepared by CrowdStrike[7], Recorded Future[8] and Red Canary[9] (lists are sorted by name) and the common techniques between these lists. In these lists, various techniques will be listed differently, but diversity does not necessarily signify inaccuracy or incompleteness. Since different methodologies and threat samples were used when creating the lists, it is natural to see different results.

The reader should bear in mind that this research is based on malicious activities of malware after infecting target systems. Therefore, the research is unable to encompass techniques in the Initial Access tactic, which are used by adversaries to gain a foothold in the target network. It should be noted that the Initial Access techniques such as Spearphishing Link (T1192)[10] and Spearphishing Attachment (T1193)[11] are also frequently used by attackers.

Due to the design of the MITRE ATT&CK framework, a malicious action may be mapped to multiple techniques and some techniques are overlapped. For example, Emotet malware uses an obfuscated VBA macro code that includes a command executed by cmd.exe that consists of a malicious PowerShell code. Therefore, running this VBA macro code can be mapped to Scripting (T1064), Command-Line Interface (T1059), and PowerShell (T1086)[12]. However, malware sandboxes map a malicious action to a single technique.

This research has shown that seven of the Top 10 ATT&CK techniques are categorized in the Defense Evasion and Execution tactics. Adversaries frequently inject malicious code into legitimate processes (T1055 Process Injection), use names and locations of legitimate programs for their malicious files (T1036 Masquareding), and execute malicious code using legitimate scripting languages such as VBScript, PowerShell and command-line batch scripts (T1064 Scripting).

The Picus platform continuously challenges your security controls in production with thousands of real attack techniques and identifies gaps in your security stack. Moreover, Picus provides actionable prevention signatures and detection rules to remedy security controls against unblocked and undetected attacks. As a result, organizations can prevent and detect adversarial TTPs including Defense Evasion techniques, get the maximum benefit from their security investments, quantify their risks, and increase their resilience. Because of our unique approach, Picus was recognized as a Cool Vendor in Security and Risk Management in the 2H19 report by Gartner.