On October 21, 2022, The Cybersecurity and Infrastructure Security Agency (CISA) released a joint advisory on Daixin Team [1] with The Federal Bureau of Investigation (FBI) and the Department of Health and Human Services (HHS).

Daixin Team disrupts operations of Healthcare and Public Health (HPH) organizations with ransomware and steals personal identifiable information (PII) and patient health information (PHI). Then, the cyber threat group threatens to release the stolen information unless the ransom is paid.

In this blog post, we explained tactics, techniques, and procedures used by Daixin Team.

Daixin Team is a financially motivated ransomware and data extortion group that emerged in June 2022. The threat group mainly targets Healthcare and Public Health (HPH) organizations in the US.

The first known victim of the Daixin Team was Fitzgibbon Hospital in Marshall, Missouri. The cyber threat group claims to have encrypted servers and backups and stolen 40 GB of sensitive data, including patient and employee records. According to Daixin Team's spokesperson, the hospital did not pay the demanded ransom, and in response, the threat group leaked the stolen data to the public [2].

Daixin Team targeted another healthcare organization on September 1, 2022. OakBend Medical Center, located in Richmond, Texas, was hit by ransomware and data exfiltration attacks. Daixin Team claimed to steal nearly 3.5 GB of sensitive information. The sample of stolen data indicates that the PII data belonging to patients can be viewed in plaintext, including their names, addresses, and Social Security Numbers.

Daixin Team's spokesperson claims that the cyber threat group's motivation is financial. The spokesperson claimed that they had also attacked Russian and Commonwealth of Independent States (CIS) targets, but the victims did not care about the data leak and did not pay the ransom. 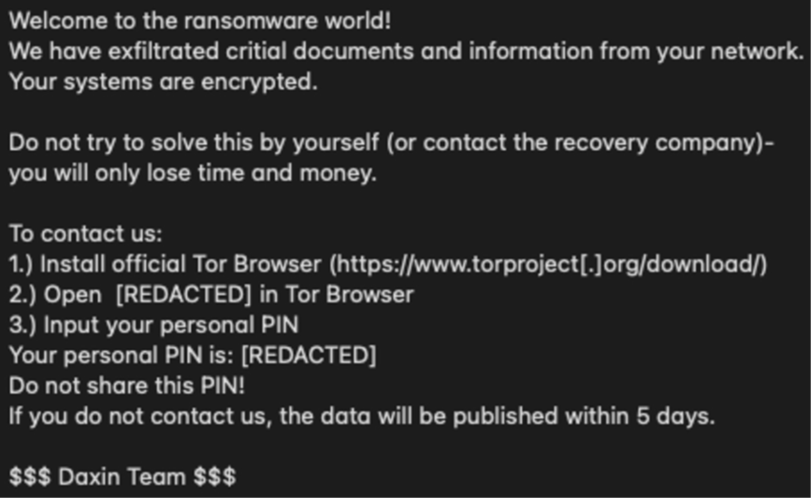 Daixin threat actors abuse unpatched vulnerabilities in public-facing services such as VPN services to gain access to their target's network.

Some services, such as SMB, can use password hashes for authentication in addition to the password itself. Daixin Team abuses this feature and uses password hashes to move laterally in the victim's network.

Daixin threat actors use Rclone to exfiltrate data to a virtual private server (VPS) that they control. Also, Daixin uses Ngrok to create a secure tunnel for data exfiltration.

Daixin Team encrypts their victims' files and directories using ransomware that is based on leaked Babuk Locker.