November was another busy month for new malware families and ransomware campaigns. As always, Picus Labs swiftly added attack simulations to Picus Threat Library for these new threats as they were discovered.

This blog briefly explains the top five cyber threats observed in November 2022. You can easily simulate these threats and validate and improve your security controls against them with the Picus Complete Security Validation Platform.


On November 16, 2022, CISA and FBI released a joint advisory on Iranian government-sponsored APT actors [1]. In their attack campaign, threat actors exploited the Log4Shell vulnerability to gain a foothold on an unpatched VMware Horizon server, which belongs to a Federal Civilian Executive Branch (FCEB) organization.

Upon initial access, adversaries allow-listed specific directories to download malicious tools without getting caught by virus scans and executed a PowerShell script to impair Windows Defender. Next, the threat actors downloaded malicious files and software (XMRig crypto miner) on the target system, which are later leveraged to establish persistence and use the victim’s computing power to mine cryptocurrency.

Next, adversaries laterally move from the compromised VM Horizon server to the VMware VDI-KMS host using a built-in Windows user account over an RDP connection. Later, they transferred some tools to the VID-KMS host (Mimikatz, PsExec, ngrok) for post-exploitation activities. In the end, adversaries had complete control over all domain-joined assets, including the Domain Controller.

As of November 2022, Hive ransomware has affected more than 1300 companies, causing a waste of $100 million US dollars as a ransom payment.

After the foothold is gained, Hive actors download malicious binaries and an obfuscated Powershell script, which is part of the Cobalt Strike framework, from their C2 server. Upon compromising the most powerful built-in user on the local computer, NT Authority, adversaries dump all NTLM hashes to leverage a Pass-the-Hash (PtH) attack.

Using the stolen valid account credentials, adversaries send Remote Desktop Protocol (RDP) connection requests to many internal assets to see which databases they have access to. It is suspected this was done to check the expansion of their access and figure out which sensitive information they can exfiltrate before the encryption starts. Next, having a list of all domain objects, attackers execute a batch script to ping every item in the list and write the ones that respond to a file. These files later get encrypted for higher impact.


Starting from March 2022, we started to see a new cyber-espionage activity scratching the surface. According to security researchers, this attack campaign is tracked to an Advanced Persistent Threat (APT) actor, Earth Preta [3] (a.k.a Mustang Panda and Bronze President).

The victimology points to the usage of fake Google and DropBox accounts to distribute the Hive malware. Adversaries send targeted phishing emails, spearphishing, with a malicious Google Drive or DropBox link attached to them. Analysis shows that attachments contain malicious archive files (rar/zip/jar), consisting of various files such as images (.png), word documents (.doc), and legitimate executables (.exe). These files possess benign-looking names, luring the victims into thinking that they come from governmental sources, while in reality, they trigger the execution of the following malware families: TONEINS, TONESHELL, and PUBLOAD.

Among these three malware, TONESHELL is the backdoor that is mainly used by Earth Preta in their targeted phishing campaigns. TONESHELL gets loaded and decoded on the target system through the shellcode loader, called Backdoor.Win32.TONESHELL.

Further analysis shows that the code of the TONESHELL payload contains various functions with very self-explonatory strings used for uploading, downloading, and executing files, lateral movement, and data exchange over intranet through OnePipeShell, one-way shell over one named pipe [3], and TwoPipeShell functions.

After the backdoor is installed and encrypted C2 communication is established, adversaries exfiltrate sensitive information as part of their double-extortion method.

Picus Labs have already had the threats for Mustang Panda.

Even though we first started to see it in Korea, more and more users are becoming victims of a new variant of Koxic ransomware worldwide.

Upon getting executed, Koxic ransomware starts a discovery phase to retrieve the current system information. Following this, they re-configure the RDP expiry as maximum to maintain a more extended remote desktop session and disable both the real-time and behavior monitoring features of the Windows Defender to evade detection and prevent the defending systems from sending alert notifications to the SIEM systems.

The ransomware continues its flow by deleting the volume shadow copies and disabling database services like MongoDB, SQLWriter, and MySQL.

Then, Koxic malware starts to make a list of all targets that can be encrypted. As a parallel process, it beings a threat that loops over this list, encrypting each item one by one. Encryption is performed using the AES algorithm in CBC mode, where the Initialization Value (IV) value and the symmetric key for the AES algorithm are encrypted by an asymmetric encryption algorithm, RSA.

Picus Threat Library includes the following threats for Koxic ransomware. We recommend that organizations validate their security infrastructure against the Koxic ransomware that we will likely encounter more in the wild.

In April 2022, Aurora was first advertised under the Russian-speaking hacking forums and Telegram channel as a Malware-as-a-Service (MaaS) botnet with data-stealing and remote access features. In August 2022, its activity almost vanished; being suspected that its developers had stopped selling it and removed its code from underground repositories.

However, in September 2022, a new and large amount of Aurora activity drew the attention of security researchers, revealing itself not as a botnet but as an “infostealer.” It became so popular that many big traffers teams suggested its use. In November 2022, an analysis of many active C2 servers showed that Aurora had become a number-one infostealer used by adversaries.

Aurora mainly uses the lxn/win library to get system-related information, which depends on WMIC. The following wmic commands are run in the infected host: 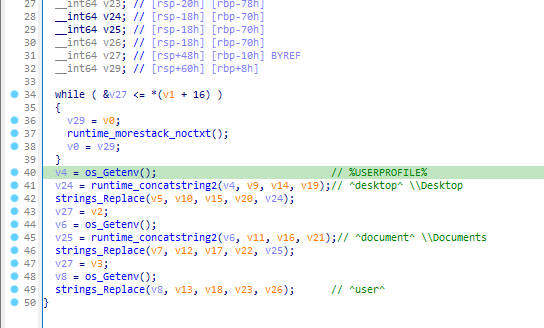 The data gets exfiltrated in the JSON format from the target system to an attaker-owned Aurora C2, which listens to the incoming network traffic on ports 9865 and 8081 ports over TCP.