Our research has found that Process Injection was the most prevalent MITRE ATT&CK technique used by adversaries in their malware.  Adversaries emphasize an increased level of stealth, persistence, and privilege in their advanced cyber attacks. As a mechanism that can provide these features, it is not surprising that Process Injection is the most frequently used technique.

Explore our full research on the 10 Critical MITRE ATT&CK Techniques.

It is easy to detect malware processes by listing the running processes and filtering out legitimate ones that are part of the operating system or installed software. If the malware can encapsulate its malicious code within a legitimate process, it will hide on the infected system. Process injection is in fact an “old but gold” technique consisting in running arbitrary code within the address space of another process. As a result, this technique enables access to the target process’s memory, system, and network resources.

Adversaries use the following methods when picking their target process for malicious code injection:

Use Cases by Malware and Threat Actors

Reflective DLL injection (loading) is one of the most used process injection methods employed by adversaries. This method allows injecting and executing a DLL inside another process by creating a DLL that maps itself into memory when executed, instead of relying on Window’s API’s loader calls. This technique avoids storing the DLL on disk and calling the Windows API’s LoadLibrary that might be detected by security tools.

Red Teaming - How to simulate?

Powersploit’s Invoke-ReflectivePEInjection  [19] module can be used to simulate the reflective DLL injection technique. In addition to loading a DLL or EXE into the PowerShell,  It can reflectively load a DLL into a remote process. Because of its capabilities, adversaries are also using this module for injection, such as the Turla APT Group [20].

The below command is a simulation of reflective DLL injection using the Invoke-ReflectivePEInjection module. With this command, contents of the calc.exe file are read into the $PEByte byte array using the ReadAllBytes [21] method. Then the byte array containing the calc.exe is loaded and executed locally using the -PEBytes parameter.

To detect the reflective DLL injection technique, we need logs that include PowerShell activities. Event log entries in the Microsoft-Windows-PowerShell/Operational log includes such activities. The Event ID 4104 (script block logging) records accurate blocks of code as they are executed by the PowerShell engine. Script block logging captures the de-obfuscated full contents of the code as it is executed, including scripts and commands, as shown in the following figure. 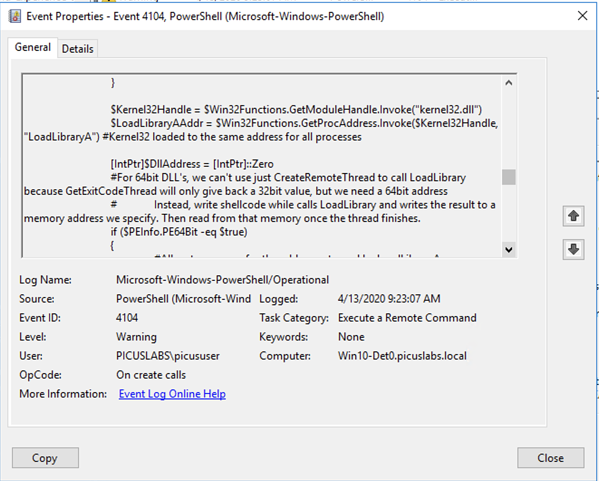 When the DLL is injected into the target process, the malware has to map the DLL’s raw binary into virtual memory. It uses  kernel32.dll and VirtualAlloc, GetProcAddress, and LoadLibraryA functions to get the correct address of the injected export function. Picus Labs’ Blue team developed the following Sigma rule by taking advantage of this finding mechanism and utilizing the Microsoft-Windows-PowerShell/Operational log with the Event ID 4104.

Appendix B - Aliases of Malware Families